HAITIAN BAR FEDERATION (FBH)
Resolution 2021-01 (English version)
On the institutional crisis and the end of the presidential term
Adopted on Saturday, January 30, 2021

Mindful of Article 59, which states that « Citizens delegate the exercise of national sovereignty to three (3) powers: (a) the legislative power; (b) the executive power; (c) the judiciary power. The principle of separation of the three (3) powers is enshrined in the Constitution » ;

Mindful of Article 59.1, which states that: « All three (3) powers constitute the essential foundation of the organization of the state, which is civil  » ;

Mindful of articles 60 and 60.1 which state that: « Each power is independent of the other two (2) in its attributions which it exercises separately. None of them can, under any reason, delegate their responsibilities in whole or in part, or to go beyond the limits set by the Constitution and by law » ;

Mindful of article 88, which states that « Legislative power is exercised by two (2) representative chambers. One (1) Chamber of Deputies and one (1) Senate that form the Legislative Corps or Parliament » ;

Mindful of Article 89, which states that: « The Chamber of Deputies is a body composed of members directly elected by the citizens and charged to exercise on behalf of them and in conjunction with the Senate, the powers of the legislative power” ;

Mindful of Article 92, which states that: « Deputies are elected for four (4) years and are indefinitely re-eligible » ;

Mindful of section 111 which states that: « The Legislative power makes laws on all objects of public interest » ;

Mindful of article 111.8 which states that: « Under no circumstances, the Chamber of Deputies or the Senate can be dissolved or adjourned, nor the mandate of their members prorogued » ;

Mindful of Article 134.1, which states: « The duration of the presidential term is five (5) years. This period begins and ends on February 7, following the election date » ;

Mindful of Article 134.3, which states that: « The President of the Republic cannot benefit from an extension of his mandate. He can only assume a new mandate after a five-year interval (…) » ;

Mindful of Article 136, which provides that « The President of the Republic, Head of State, ensures the respect and execution of the Constitution and the stability of the institutions. It ensures the regular functioning of the public authorities as well as the continuity of the state » ;

Whereas while the country is going through a deep crisis, at the same time institutional, political, economic, social and health, the date of the end of the mandate of the President of the Republic is the subject of a wide controversy ;

Whereas this controversy focuses on the combined analysis of Articles 134.1 and 134.2 of the Constitution, which provide that the presidential term, fixed in theory at 5 years, is actually bounded in time (« this period begins and will end on February 7th after the date of the elections »), with the understanding that the start-up limit is defined in relation to an electoral calendar itself set in time and tied to the previous presidential mandate (« the last Sunday » October of the fifth year of the presidential term« ) ;

Whereas that the Constitution, anticipating the possibility of a lag in the electoral calendar, provides that: 1) the President’s entry into office is deemed to have taken place at the time of his election, not his swearing-in; 2) the delay in the organisation of the electoral process reduces the effective duration of the mandate (« The President-elect takes office immediately after the validation of the election and his term of office is supposed to have begun on 7 February of the year) ;

Whereas that the controversy over the date of the end of the presidential term has its source in the ambiguities induced by the constitutional text which juxtaposes constitutional time and electoral time without taking full measure of the possible distortions ;

Whereas that it is therefore necessary to consider the context surrounding Mr Jovenel Moise mandate and the electoral process leading up to his election, which, marked by numerous irregularities, began in 2015 and continued and ended in 2016 ;

Whereas that, since that date, the mandate of President Jovenel Moise is marked by the impossibility of validly holding the various electoral deadlines ;

Whereas that in this context, on 13 January 2020 at 00:03 in the morning, President Jovenel  Moise « noticed« , by tweet on social networks, the « caducity of Parliament« , taking note of « this institutional vacuum caused by the departure of the Chamber of Deputies and the 2/3 of the Senate » ;

Whereas that, since the realization of the dysfunction of one of the three powers co-deposit of national sovereignty, the Haitian state finds itself in a situation of constitutional rupture, questioning the essence of the separation of powers and the foundation of the rule of law ;

Whereas that, since then, President Jovenel Moise has freed himself from the constitutional requirements relating to forming as well as the attribution of the Executive Power to appoint a de facto Government, which has not obtained the confidence of Parliament;

Whereas that, far from conceiving this crisis as a temporary situation requiring to limit itself to the management of current affairs and the urgent preparation of elections, President Jovenel Moise has publicly regarded this « institutional vacuum » as a « historic opportunity« to govern alone and reform the state, allowing itself to substitute to the popular sovereignty to appoint interim agents in place of local elected officials and to replace the Legislative Power by legislate by decree ;

Whereas despite the numerous warnings, and in particular the resolution 2020-06 adopted by the Federation of Bars of Haiti, President Jovenel Moise has multiplied the adoption of Decrees on matters of public interest; several of these Decrees raising deep concerns about respect for individual freedoms, the abuse of state surveillance powers and the muzzling of independent institutions ;

Whereas at the same time, the security situation has worsened profoundly throughout the country, with a marked increase in violence and cases of kidnapping, as well as the increase in targeted killings and massacres; whereas the police forces, involved in numerous cases of human rights violations, have proved incapable in this context of protecting and defending the population ;

Whereas numerous reports from human rights organizations, national and international institutions and the Central Directorate of Judicial Police raise extremely serious suspicions of collusion between the political authorities and increasingly well-armed criminal organizations ;

Whereas the judicial system, bogged down in bad practices and paralyzed by unresolved social conflicts, has proved more failing than ever, unable to guarantee the right of access to justice for all and thus, cultivating a terrible sense of impunity ;

Whereas President Jovenel Moise did not even respond to the request made by the Bar Of Port-au-Prince, the Federation of Bars of Haiti and numerous Associations of Bars and Lawyers around the world regarding the establishment of an international Commission of Inquiry, able to shed light on the circumstances of the killing of Bar President (batonnier)  Monferrier  Dorval ;

Whereas despite the 2020-05 resolution adopted by the Federation of Bars of Haiti, the Executive continues in violation of the September 2018 law, its control over the new legal assistance system; that, moreover, the mandate of several Judges in charge of particularly sensitive cases has not been renewed, without any motivation and despite the favourable opinion issued by the Superior Council of the Judicial Power ;

Whereas many months after the finding of the « institutional vacuum », President Jovenel  Moise issued on 18 September 2020, in violation of the provisions of the Constitution and without any political consensus, an order « naming the Provisional Electoral Council and setting its mandate » ;

Whereas the “Cour des Comptes et du Contentieux Administratifs” (CCCA) has indicated that it does not recognize this Provisional Electoral Council, whose members have not even taken the usual oath provided for by the Constitution ;

Whereas this Provisional Electoral Council has presented an electoral agenda foreseeing the adoption of a new Constitution followed by general elections aimed at the renewal of all elected representatives, which agenda plans to wait (notwithstanding the possible complications in holding the polls) the date of February 2022 for the entry into office of these new elected representatives ;

Whereas in this context the question arises of the legitimacy of Mr Jovenel  Moise to claim to extend over such a long period, the situation of constitutional rupture, while offering himself the possibility of leading the State alone for a (entire) new year, to rebuilding institutions and to carry a particularly fragile and decisive electoral process in a security context more than worrying ;

Whereas in order to justify his remaining in charge until 7 February 2022, Mr. Jovenel  Moise focus his arguments on the respect of the constitutional time of five (5) years that would have been granted to him from the date of his swearing-in, on 7 February 2017 ;

Whereas by the same way, Mr Jovenel  Moise rejects the aforementioned provisions of Articles 134.1 and 134.2, which limit the duration of the presidential term to the date of the elections (2015/2016), and not to the effective date of entry into office (2017) ;

Whereas in addition to earlier precedents, the issue of the interpretation of constitutional provisions relating to the duration of elective mandates was raised by President Jovenel  Moise himself on the occasion of the announcement of the end of the mandate of parliamentarians on 13 January 2020 ;

Whereas on this occasion, the terms of the hundred and nineteen (119) Deputies and twenty (20) Senators were considered terminated, including: 1) those of twenty-five (25) Deputies and three (3) Senators elected in the by-elections held simultaneously in the last round of the presidential election (November 20, 2016), those parliamentarians sworn in in January 2017 and; 2) those of two (2) other Deputies whose swearing-in took place in February 2017 ;

Whereas therefore, and while the Constitution unequivocally defines a term of four (4) years for Deputies and six (6) years for Senators, twenty-seven (27) Deputies and three (3) Senators remained in charge only two (2) or three (3) years ;

Whereas notwithstanding the considerations as to whether or not the challenges which these parliamentarians did not fail to raise, it is important to take note of the rejection of all their appeals, and the consequent imposition of a restrictive interpretation of the calculation of the length of elective mandates;

Whereas this restrictive interpretation, excluding the consideration of the actual date of the swearing-in as the effective term of mandate, was privileged even though it led, due to the absence of the holding of elections, to a rupture of democratic continuity, in particular hindering any possibility for the Legislative Power, limited to ten (10) Senators still in charge, to ensure its fundamental role of controlling the Executive Power ;

Whereas no legitimate reason can justify such a divergence of interpretation of the constitutional provisions from the authorities ;

Considering that it is clear that Mr Jovenel  Moise has, if not organized, at least widely benefited from the constitutional rupture that he noticed himself on 13 January 2020; and that he has openly take advantage of the situation to initiate an autocratic exercise of power, raising deep concerns about respect for fundamental rights and freedoms as well as the future of Haitian democracy ;

Whereas as stated by Montesquieu, “So that none can abuse power, we must arrange, by the disposition of things, that power shall check power”. a state  without a separation of powers, that has no de facto Constitution ;

Whereas the experience of the last elections in the United States reminds us that the legitimacy conferred by a presidential election is not enough to embody and guarantee democracy on its own, the « guardian of the continuity of institutions » can quickly, for lack of sufficiently strong counterweights, become its first gravedigger ;

Whereas in the absence of a Constitutional Council, the body responsible for interpreting the Constitution, delineating the scope of each Power and deciding on possible conflicts between them, the Federation of Bars of Haiti believes it useful to position itself in order to shed light on this legal controversy;

After discussions and with the majority,

The Board of Directors of the Federation of Haitian Bars (FBH) 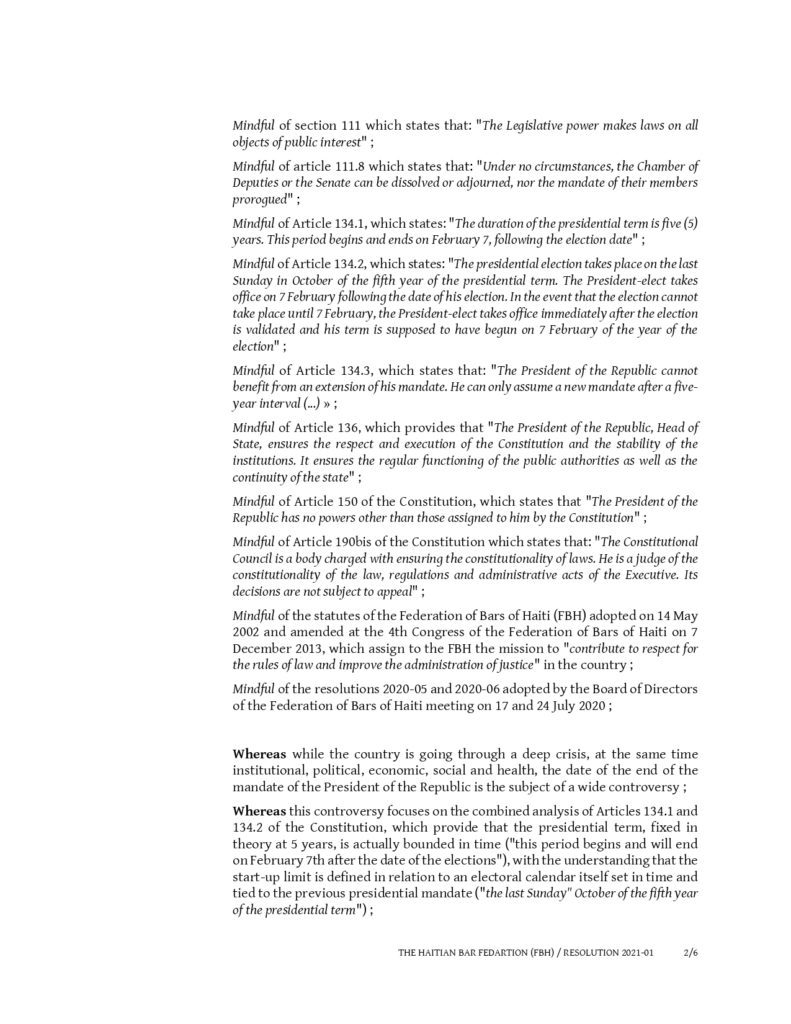 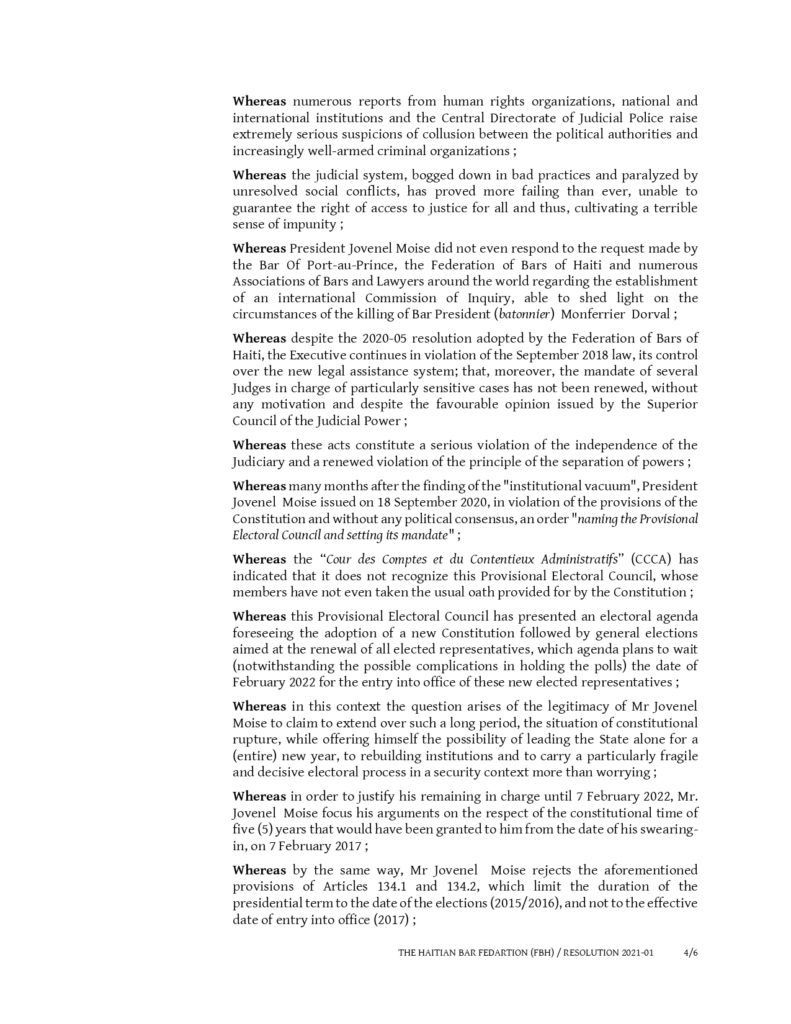 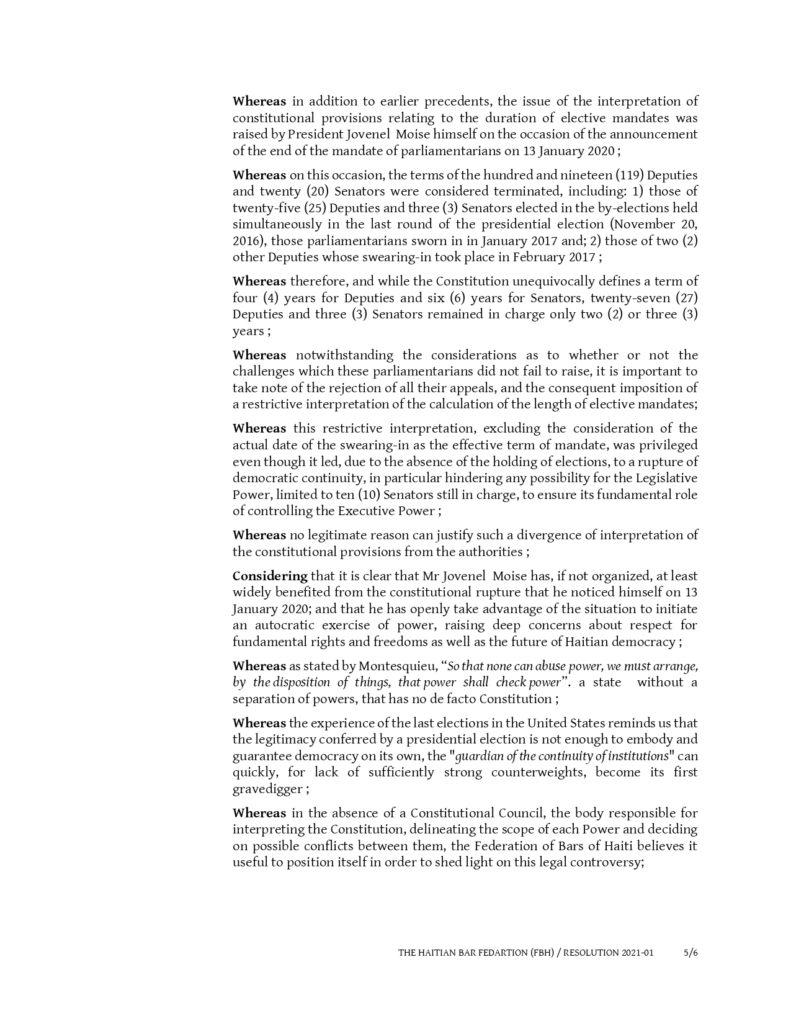